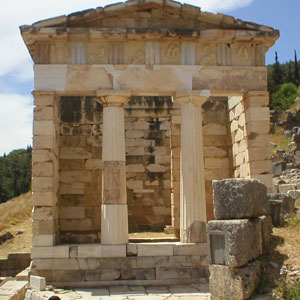 You’ve seen photos of the ancient Acropolis in Athens, dating back to the 5th century BC-now’s your chance to see it in person. You’ve watched the Olympics on TV-now’s your chance to walk among the remains in Olympia, where the Olympics began in 776 BC. You’ve eaten at Greek restaurants-now’s your chance to enjoy an authentic Greek cooking demonstration, where you’ll learn how to make the traditional Greek tzatziki appetizer. All of this and more await you on this Classical Greece tour.History comes alive on your guided visits to many of Greece’s ancient sights. In addition to the Acropolis and Olympia, also visit ancient Corinth, dating back to the 8th century BC and the place where St. Paul preached; see the Beehive Tombs and Lion Gate in Mycenae; the amazingly well-preserved, 2,300-year-old open-air theater in Epidaurus; and Thermopylae, where the battle between the Greeks and Persians took place in 480 BC.In Delphi hear about the Oracle and how people in ancient Greece would travel there to seek his wisdom. Tour the excavations, and visit its Archaeological Museum. In Meteora step back in history when you visit the fantastic landscape with its 24 rock-top monasteries. In addition to all of these included sights, Globus has arranged some typical experiences for you to get a true sense of Greek life; like a sirtaki dance lesson or a glass of Ouzo. Plus, you’ll be accompanied by an expert Tour Director who will bring this country to life by sharing its history, stories, and insider secrets.From the picturesque fishing villages to ancient historic sights, this Greece tour is a vacation of a lifetime!

ATHENS — Athens provides a good study in how the New South coexists with the Old South. A lively music scene
(supported by students from the University of Georgia) flourishes in the bars, clubs and coffeehouses of the restored
downtown (it brought the world such bands as R.E.M. and the B52s). But you don’t have to look far to find the Old South: It’s apparent in the many Greek Revival homes and buildings that dot the city, the best example being the Taylor-Grady House. The University of Georgia, across the street from downtown, boasts a number of these Greek Revival buildings, including Demosthenian Hall and the president’s house. The university is where you’ll also find the Georgia Museum of Art (a collection heavy in 19th- and 20th-century American and Italian Renaissance paintings). Off campus you’ll find the Church-Waddel-Brumby House, the oldest surviving residence in the city, now serving as the visitors center. Athens is also home to the fragrant State Botanical Gardens of Georgia. Nature trails wind through the gardens of native flora — the rose garden is especially nice (it blooms May-November). Southeast of Athens in Washington is the Robert Toombs House, the restored home of a recalcitrant Southern politician who hated the North for political reasons and hated the Confederacy almost as much for not electing him president. One of the least mellow individuals the smooth-as-silk South has produced, Toombs never gave up his secessionist fervor or his cantankerous manner. 66 mi/106 km east of Atlanta.

Crete, an island of Greece, southeast of the mainland, constituting a region of the country. The island is oblong in shape. Its area is 8335 sq km (3218 sq mi) and the population is 536,980 (1991). The capital city and principal seaport is Khania. Iraklion is the largest town. Crete has a mostly mountainous terrain. The northern coast of Crete has a number of good harbors, notably the Gulf of Soudha. The southern coast, consisting largely of precipitous escarpments, is inaccessible to shipping. Agriculture is the chief source of wealth in Crete.

Mykonos is the most chic and sophisticated of all the Greek Islands–instantly recognized by its glittering crescent of white-washed houses lining an azure bay. The beaches here are unspoiled and inviting, especially along Plati Tialos Bay. Miniature churches, lazy windmills, and tiny cafes serving up Greek specialties line the streets. Sample the freshest squid or lobster just snatched from the blue Aegean Sea, or shop for typical flokati rugs.